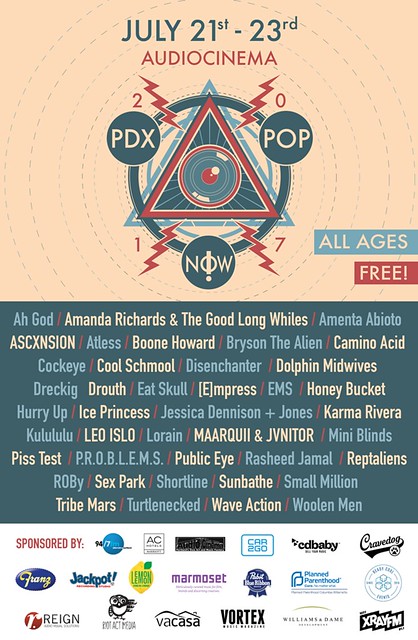 Summer in Portland is in full swing and it is once again time for the music community to come together to celebrate many underground artists for a weekend at PDX Pop Now! ‘s annual festival. As usual, it is all ages, free (just walk right on up), and adjoined by Rigsketball’s annual musician basketball tournament.

With all of the options for the weekend, it might be intimidating to wade through. We are here to help you through each day with a general overview as well as pointing out some of the bands you won’t want to miss.

Friday is the shortest day, starting at 6 p.m, with the last act coming on at 11:30 p.m. While the other days seem to have “blocs” of likeminded artists (more on that below), Friday evening truly is a beautiful mish-mash of genres and artists.

Reptaliens – 10:45 p.m. – Another solid Portland psych band separating themselves from the rest with quality.

Saturday is the longest day, starting at noon and ending after midnight. Music fans are going to get a lot thrown at them, but in digestible blocs that flow very well together. You’ll want to show up early and stay late for sure.

ASCXNSION – 12:40 p.m. – Another compelling and up and coming voice in the Portland hip-hop/R+B scene.

[E]mpress – 1:20 p.m. – A rougher and more in-your-face hip-hop artist that will get your mind right for the afternoon.

Amenta Abioto – 3:20 p.m. – PDX Pop Now! has never shied away from experimental acts and this year is no different, with this captivating looped vocal artist in a prime afternoon spot.

Disenchanter – 6 p.m. – So proud of PPN for having at least one metal band every day. Joey and Sabina are some of the hardest workers in the scene and they bring the doom hard.

Kulululu – 7:20 p.m. – You’ve seen their name on posters around town and wonder how to pronounce it even after their song “We are Kulululu.” Come find out what makes these weirdos so compelling.

Boone Howard – 8:40 p.m. – No longer sharing milk, the prolific song writer returned this year with a dark horse entry for best Portland album of 2017. Heartfelt and earnest Portland rock in the vein of The Domestics.

ROBy – 10:05 p.m. – As night falls, another Portland rapper will churn the crowd into a frenzy.

Maarquii + JVNITOR – 11:35 p.m. – Partying continues into the late night with the project from Chanti Darling dancer.

Sunday is a shorter day than Saturday but still somewhat long, starting at noon and having the last performer on at 9:35. The day is light on dance/hip-hop/r+b and heavy on rock, punk, metal, and experimental artists.

Jessica Dennison + Jones – 1:20 p.m. – If you partied too hard the night before, the Jessicas will soothe you into some relaxation with laid back pop/rock.

Dolphin Midwives – 2 p.m. – Still easing into the afternoon with an experimental harpist. It is Portland after all.

Drouth – 4 p.m. – Probably the heaviest band of the festival, straight face-melting black metal to scare the kiddos or make them want to sacrifice their parents to Satan. (The band is not affiliated with Satan).

Sunbathe – 5:20 p.m. PPN veteran Maggie May Morris brings her Sunbathe project to the stage. Showcasing a different side of her artistry, do not miss this set.

Woolen Men – 7:20 p.m. The festival organizers seemed to save all the bands with the most “cred” for the very end of the festival, including these rockers who have been around for a while and who never disappoint.

Eat Skull – 8:50 p.m. – Another band that has tons of street cred and has been around for a while, Eat Skull has some new material and could connect with a new generation of Portland underground fans.

Hurry UP – 9:35 p.m. – Featuring members of the Thermals and industry veterans, a great way to close out PDX Pop Now with straight forward Portland rock.